The Age of Dwarves

One of the first things I noticed when looking into this topic is that there seem to be 5 important “age-marks” in a dwarven life.

The first at the age of 30, when dwarves are considered to be “battle ready”.
Note that, “battle ready” doesn’t equal adult… . (Compare it to 14-year old soldiers giving their lives in WWI fields). The idea behind this seems to be clear, when you are tall enough to carry armour and strong enough to hold a heavy double handed axe or hammer, you are “battle ready”. Dwarves remained young – e.g. regarded as too tender for really hard work or for fighting – until they were 30 or nearly that (Dain II was very young in 2799 (32) and his slaying of Azog was a great feat). There are a few remarkable exceptions though, such as Gloín, who fought in the war of Dwarves and Orcs – in the Battle of Azanulbizar at the very tender dwarven age of 19, so Gloín must have been very tall and strong for his age.

The second age-mark is at the age of 40, by which time dwarves haven take on the appearance of age (by human standards). This metamorphoses takes place somewhere between the age of 30 and 40, and happens very quickly (in a few years). By forty all Dwarves looked much alike in age, until they reached what they regarded as old age, about 240. Note however, that a dwarf at the age of 40 is still not considered an adult.

This takes place at the third age-mark, between the age of 65 and 75. The age at which dwarves take on the role of adult. Meaning that they move from their fathers home into that of their own (or their own halls if they are regal or heavy with gold). This age allows them to adventure completely on their own, under their own name (meaning they can earn riches in expeditions without having to give these to their father). This explains why Gimli could not join into the expedition of Erebor (as he was only 62 at the time), but Kili could (who was 77 at the time). It is also the age some dwarves (that have an interest in doing so) start to think about taking a wife (no earlier than when they are 90 in most cases). Most dwarves however do not marry and from what we see, most that do have no more then 4 children, in most cases one or two. The rare cases dwarves have 4 children is because the first born were girls, so the couple continues to have children until a male heir is born. Dwarves can have children until their old age, but most no longer do however after the age of 120 or so. If a son is seen to be 110 or so years younger than his father, this usually indicates an elder daughter. 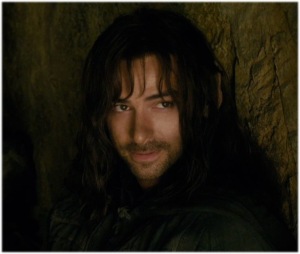 Kili as shown in -The Hobbit: The Desolation of Smaug – All Rights Reserved

The 4th age mark is that of old age, which happened at the age of 240 for most dwarves. They then underwent a new transformation and began to age greatly and wrinkle and go white quickly (baldness being unknown among them), unless they were going to be long-lived, in which case the process was delayed. So unlike with men, physically dwarves of 40 and dwarves of 240 can look almost identical. Otherwise ‘old age’ lasted not much more than ten years, and from say 40 or a little before to near 240 the capacity for toil (and for fighting) of most Dwarves was equally great.

The last age mark is that of death. Dwarves of different ‘breeds’ vary in their longevity. Durin’s race were originally long-lived (especially those named Durin),
but like most other peoples they had become less so during the Third Age. Their average age (unless they met a violent death) was about 250 years, which they seldom fell far short of, but could occasionally far exceed (up to 300). A Dwarf of 300 was about as rare and aged as a Man of 100. Dwalin lived to be 340, a extremely rare age, even for a dwarf. Dwarves either died in combat, of old age, or (in times of riches) due to corpulence. Corpulence being the only physical disorder they suffered from (they were singularly immune from diseases such as affected Men, and Halflings). In times or great riches many grew very fat, and could not do much (save eat) afterwards. 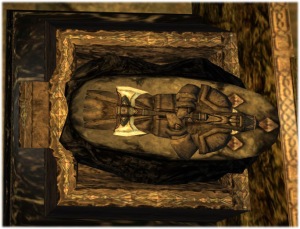 Dwarf Tomb as seen in Lord of the Rings Online

* Unfinished Tales – The Quest of Erebor

The Dwarrow Scholar first experienced the brilliance of Tolkien when he received a copy of The Hobbit from his uncle as a kid, reading it feverishly again and again. Some years on, when he got his very own walk-man (aye forget about tiny phones, this thing was a brick and played cassette tapes) he made his own little audiotape of The Hobbit, so he could listen to it on his bike on his way to school. Between reenacting the Battle of Five armies with 4 of his school friends (still feel sorry for the kid that had to be the Orc) and before the days of the internet, you would find Roy frequently in libraries trying to find all he could about Tolkien and his beloved dwarves. When Roy isn’t delving into Neo-Khuzdul or searching for lost dwarvish treasures on the net he’s enjoying time with his wife and son, re-reading his tormented Tolkien paperbacks, watching a good movie, learning new languages or playing a game of LoTRO or other dwarf related games.
View all posts by The Dwarrow Scholar →
This entry was posted in Life & Death. Bookmark the permalink.

15 Responses to The Age of Dwarves