“Thorin son of Thrain son of Thror King under the Mountain!” said the dwarf in a loud voice, and he looked it, in spite of his torn clothes and draggled hood.” – The Hobbit Chapter 10 A Warm Welcome.

It is clear from the above example that Dwarves and especially those of regal line don’t just have one name they use when introducing themselves. In fact, using our example above, Thorin could have even added the name “Oakenshield”, or “of the Longbeards” to this already long personal introduction.

J.R.R. Tolkien said that names such as “Thorin”, “Thrain” and “Thor”, are what is known as “outer names”. Names dwarves use when talking to non-dwarves (and even among themselves), hiding their “real” names from most. Tolkien said the language of Dale was used for the outer names of dwarves, as he took most of the dwarvish names in his work, from Old Norse poems (Poetic Edda). This he later explained by the translation fiction: since Westron was translated with English, the language of Dale, used by Dwarves for their “outer” names, was translated with Old Norse. So for Tolkien it was a convenient device to allow him to use Old Norse names for the dwarves. 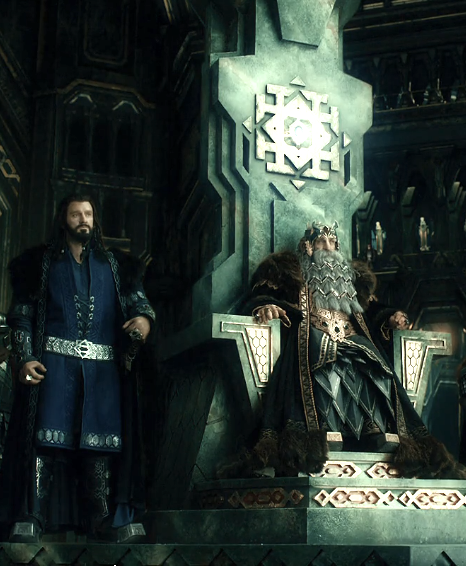 Thorin and his grandfather King Thrór as seen in The Hobbit movies.

This explanation (of using “Dalish” for the outer names of dwarves) however leads to a major problem.  Seeing that if dwarves got their outer names from the men of Dale, Durin the Deathless could not possibly have been called Durin, seeing he was created by Aulë hundreds of years before any man (let alone one of Dale) even existed.  One could assume that the name “Durin” was a name the dwarves gave sometime during the third age to the eldest of their kind and he was known by another name before. But that wouldn’t make sense either, seeing that the records of the elves use the name of Durin as well.

In other words, it doesn’t make sense for the dwarves to have taken their outer names from men, as they didn’t exist yet. So, how do we explain this? Well, the other way around seems much more logical.  What I mean is, it would not be illogical for the men of Dale to “adopt” the outer names of dwarves; outer names the dwarves invented themselves.  The men of Dale lived in close proximity to the dwarves, so it is not unthinkable that they would have used taken such names for their sons. And perhaps in later days, the names the men used (which likely took on a “Dalish” flavour) were in turn used by the dwarves themselves for their sons.  This would explain the enigma of the name “Durin”. Dalish was however not the only other language used for outer names, as the First Age dwarf King of Nogrod “Naugladur“, clearly uses an early-elvish name for his outer name (though it could be argued the elves gave him this name – as it is only mentioned in their histories – it’s likely meaning is “King of Dwarves” in Goldogrin (early-elvish).

Now, as we’ve covered, the outer name could be given freely, but the inner name was a matter of top secrecy, like the language Khuzdul itself. Dwarves do not even record their true (inner) names on their tombstones. A prime example of this is notable by the runes written on Balin’s tomb in Moria, which have the names Balin and Fundin on them, both “outer names”.

Dwarves in fact have 4 different names, their outer name (in a manner these could be seen as “first names”). Then there is their inner name, which is revealed to no-one. Apparently given to them at birth and revealed to other dwarves only on very rare occasions, likely at important dwarvish ceremonies.

The third is their descriptive name, or epithet. Such epithets, like their outer names would not be secretive. Examples of epithets can be found in the names we see of the First Age Dwarves of the Ered Luin, Azaghâl, Telchar, and Gamil Zirak, are believed to be descriptive names either directly in Khuzdul (Gamil Zirak, Azaghâl) or derived from Khuzdul (Telchar). Such descriptive names they tell us something about the dwarf or his deeds.  The usage of Khuzdul for such names confirms that not all Khuzdul was held secret (like place names). Dwarves even gave such names to non-dwarves. “Felakgundu”, the name given to the elf Finrod, is a clear example of such an epithet.

Another example of an epithet is “Oakenshield” or “Ironfoot”. In these two examples the Khuzdul descriptive name has been translated to the common tongue. Unlike Azaghâl, Telchar or Gamil Zirak these dwarves lived in a period where Westron was the common tongue and Khuzdul had become a language of lore, hence it would be logical for such dwarves of great renown to translate their epithets in Westron. Note that such epithets are  NOT handed down, unlike the last names of men; such names are in fact earned.

The 4th name dwarves commonly use in their personal introduction is their patronymic name, indicating their lineage; “Balin Fundinul” – “Fundinul” being a fine example of patronymic name – meaning “son of Fundin”. In other words, it merely indicates the outer name of the father of the dwarf. On tombstones this would have been written in Khuzdul (“Fundinul”), yet spoken in Westron when one would introduce oneself, considering the secrecy of the Khuzdul language.

Lastly, a dwarf can indicate their clan lineage, although not considered a name itself, noting “of the Longbeards” in place (or in addition too) a title is perfectly acceptable. These names cannot be invented; there are 7 clans, no more – no less (not counting the extinct exiled petty dwarves who could be considered the 8 clan).

When would a dwarf use which name?

Dwarves would never ever use their secret “inner name” for introductions. The only other “rule” I have noticed in the Tolkien writings, is… the more official, prestigious or formal an introduction is, the more names are used (apart from the inner name obviously). To make matters utmost official one could place their title at the end of it, example: Thorin Oakenshield, son of Thráin, son of Thrór, King Under the Mountain.  In the Third age all of this would be said in the common tongue, and perhaps in ceremonies among dwarves in Khuzdul.  Revealing Khuzdul for names (place names, outer names, descriptive names or titles – not inner names) would likely not be considered an offence against the secrecy of the language. Seeing we can find several examples of this happening in Tolkiens writings (Azaghâl, Felakgundu, etc…)

What happens to dwarves that hand out their inner names freely?

Exile would be the likely answer. Petty-dwarves freely gave away their names and this may very well have been one of the reasons why they were exiled. 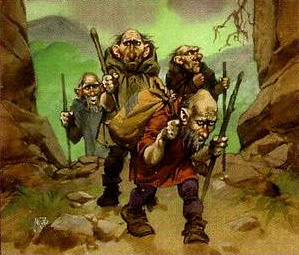 The Petty-dwarves by Angus McBride

An example of a Full Dwarvish name (using my LotRO dwarf character as an example):

This above example would only be used when meeting the King under the Mountain himself, otherwise it would be considered far to elaborate an introduction.

Note that in this example all names are listed, except off-course the inner (true) name of Kandral.

The Dwarrow Scholar first experienced the brilliance of Tolkien when he received a copy of The Hobbit from his uncle as a kid, reading it feverishly again and again. Some years on, when he got his very own walk-man (aye forget about tiny phones, this thing was a brick and played cassette tapes) he made his own little audiotape of The Hobbit, so he could listen to it on his bike on his way to school. Between reenacting the Battle of Five armies with 4 of his school friends (still feel sorry for the kid that had to be the Orc) and before the days of the internet, you would find Roy frequently in libraries trying to find all he could about Tolkien and his beloved dwarves. When Roy isn’t delving into Neo-Khuzdul or searching for lost dwarvish treasures on the net he’s enjoying time with his wife and son, re-reading his tormented Tolkien paperbacks, watching a good movie, learning new languages or playing a game of LoTRO or other dwarf related games.
View all posts by The Dwarrow Scholar →
This entry was posted in Names. Bookmark the permalink.

Leave a Reply to The Dwarrow Scholar Cancel reply