Posted on September 20, 2015 by The Dwarrow Scholar

It is with great pride and excitement I can announce that I will be one of the judges at the first ever Tolkien Language Haiku Contest on Middle-Earth News, as part of the Tolkien Week celebrations. 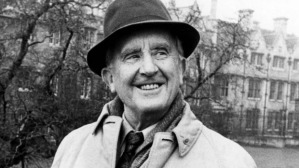 As Middle-Earth finds its origins in the languages created by Professor J. R. R. Tolkien, I find this contest a truly unique way to honor Tolkien’s passion for languages, which in turn sparked a similar passion in my own heart.

Some time ago, during the Midsummer Moot haiku contest, by Middle-Earth News, I entered a haiku in Neo-Khuzdul. To my surprise it won the contest. Seeing that I wasn’t in it to win anything though (truth be told I just wanted to try my hand at another Neo-Khuzdul haiku and had no idea there were prizes involved), I decided to suggest to Middle-earth News they could perhaps use these wonderful prizes for a new haiku contest. To my joy they agreed.

I’ll be joined by my good friend dreamingfifi (of realelvish.net), an expert in Tolkien’s elvish languages.

It’s good to know that the contest not only allows for Tolkien’s original languages and the constructed languages based on these (such as Neo-Khuzdul), but is also allows real word languages (such as Old English, Old Norse or Gothic) used by Tolkien to render his imaginary languages (Rohirric, Dalish, etc..).

Full rules and details of the contest can be found HERE.

The winner will receive a canvas art print by artist Joe Gilronan. The winner may choose any painting from the collection (and they are stunning!). And if that wasn’t enough a lovely book too: “The Hobbit: The Desolation of Smaug Chronicles: Cloaks and Daggers.”

I look forward to judging your entries my friends, have fun creating that original haiku!

The Dwarrow Scholar first experienced the brilliance of Tolkien when he received a copy of The Hobbit from his uncle as a kid, reading it feverishly again and again. Some years on, when he got his very own walk-man (aye forget about tiny phones, this thing was a brick and played cassette tapes) he made his own little audiotape of The Hobbit, so he could listen to it on his bike on his way to school. Between reenacting the Battle of Five armies with 4 of his school friends (still feel sorry for the kid that had to be the Orc) and before the days of the internet, you would find Roy frequently in libraries trying to find all he could about Tolkien and his beloved dwarves. When Roy isn’t delving into Neo-Khuzdul or searching for lost dwarvish treasures on the net he’s enjoying time with his wife and son, re-reading his tormented Tolkien paperbacks, watching a good movie, learning new languages or playing a game of LoTRO or other dwarf related games.
View all posts by The Dwarrow Scholar →
This entry was posted in Uncategorized. Bookmark the permalink.